Vocal works form an important part of Olivier Messiaen’s (1908-1992) www.oliviermessiaen.org  compositional output right from his Deux Ballades de Villon for voice and piano (1921). The three major influences on Messiaen’s music were his Catholic faith, bird song and eastern rhythms all of which feature in the works recorded on a new disc from OUR Recordings.

With Trois petites liturgies de la Presence Divine (1944) Messiaen sought to exploit new sonorities not just by the use of unusual instruments, such as the ondes Martenot, but by new combinations of more familiar instruments, scoring it for female voices, piano, ondes Martenot, celeste, vibraphone, percussion and string orchestra.

The female voices of the Danish National Vocal Ensemble and Danish National Concert Choir bring a suitably mellifluous, softly gentle sound to Antienne de la conversation intérieure (Anthem for the interior Conversation) with a fine piano contribution from Marianna Shirinyan, finding all of Messiaen’s rhythmic qualities. The gentle strings of the Danish National Chamber Orchestra blending beautifully with the choir, rising a little in dynamics on occasions before the tempo and rhythmic nature of the music picks up on the words ‘Ce oui qui chante comme un écho de Lumière’ (‘This ‘yes’ that sings like an echo of light’) with all of the mature sound of Messiaen with hints of the Quatuor pour la fin du temps, written three years earlier, in its rhythmic insistence.  Eventually the music returns to its earlier, gentle nature with the pianist providing Messiaen’s distinctive bird call phrases, beautifully done with a really fine coda.

Séquence du Verbe, cantique divin (Sequence of the Word, a divine canticle) quite literally chimes out both in the declamatory vocal style and with the piano pointed up by bells, underlaid by the strange whoops and glissandi of the ondes Martenot. The music rises in drama before broadening as the choir and strings bring a lovely sonority with beautiful harmonies before picking up the opening tempo to drive through to a terrific climax with cymbal clashes and the ondes Martenot sounding out.

The orchestra opens Psalmodie de l'Ubiquité par Amour (Psalm of the Ubiquity of love) soon joined by the choir in an insistent theme, the choir responding brilliantly to Messiaen’s demands. There are moments of gentle repose where the ondes Martenot can be heard. The choir, orchestra and soloists bring a terrific sense of urgency to the more driven passages with a lovely sense of dynamics, the piano adding so much to the drama. The music reaches a peak before a sudden hushed section on the words ‘Vous qui parlez en nous…’), (‘You who speak within us…’) quite exquisite, as both choir and orchestra and, later, the ondes Martenot bring out the otherworldly atmosphere. After a momentary pause, the tempo becomes lively as the choir and orchestra punch out the phrases, with the ondes Martenot sounding. Again there are lovely little moments when the insistent pulse slackens for a brief moment but overall the music pushes forward urgently to another climax complete with spectacular descending ondes Martenot scale before a lovely hushed coda.

This is a marvellous work given a terrific performance here.

The choir return alone for one of Messiaen’s better known and often performed choral works, O sacrum convivium! (1937) These singers open with a beautiful blend of voices, exquisite control, rising finely in the central peak, never losing their lovely sonority, before a hushed coda. A classic work beautifully performed.

Cinq Rechants (1948) for twelve solo voices forms the last part of Messiaen’s ‘Tristan’ trilogy. It is scored for three sopranos, three contraltos, three tenors and three basses. The ‘Tristan’ trilogy consists of the song cycle Harawi (1945), the Turangalîla-Symphonie (1946/48) and Cinq rechants that take the myth of Tristan and Isolde and the theme of love. The text is a mixture of French and a Sanskrit-like language invented by Messiaen himself.

A solo soprano sounds out dramatically in the opening of Hayo kapritama before falling as the solo voices from the Danish National Vocal Ensemble join in this fast moving piece. The music is often interspersed with some passages of flowing, shifting vocal harmonies, expertly sung here with brilliant precision and lovely tone. There is some terrific overlaying of individual vocal lines rising to moments of fine accuracy of pitch before the soprano brings about the end.

A solo alto opens Ma première fois before these voices weave a terrific tapestry of sound moving through wide intervals before suddenly picking up the tempo in a faster passage. The music soon slows as various individual voices take the text before arriving at the coda.

An alto opens Ma robe d'amour in another of Messiaen’s lovely melodies. The other voices join as we are taken through some exquisite harmonies, beautifully sung, before suddenly bursting out in faster, dramatic music before returning to the opening slower theme. As the music speeds and slows these singers build up a tremendous layering of textures before a declamatory halt. The voices then bring a glorious hushed, sonorous sound over which a solo soprano weaves a lovely line.

With Niokhamâ palalane soukî the voices sound out urgently before dropping to a softer, slower section within which many vocal lines are woven. The opening tempo appears again as the tempos alternate with, later, a soprano rising up in a lovely passage to which the others bring a fine sonority to end.

This is a terrific disc that will appeal to Messiaen and choral enthusiasts alike. They are well recorded at two different venues and there are informative notes with full texts and English translations. 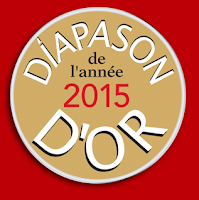 Since this review was posted, Marcus Creed and the Danish National Vocal Ensemble Messiaen disc has been awarded the coveted the Diapason D'Or 2015.


Posted by CLASSICAL REVIEWER at 07:17